Acting Workshop with the trainees of UCEP last Sunday

It was Johanna Tückmantel, UCEP´s weltwärts volunteer, who actually came up with the idea of a drama workshop in her organization to introduce the trainees there to basic techniques of dramatic art. So this Sunday Ram, Sushila, Sushma and me, Rebecca, went to Sano Thimi to give a workshop.The Sarwanam trainers started with some introduction and chanting „Aum“ together. As it is an essential part of art to express what is inside yourself, it is essential to concentrate on yourself and what is on your mind, where you are, what´s going on, first. So Ram gave instructions for a short meditation during which everyone was given the time to answer who you are and where you see yourself now. Afterwards the participants shared their feelings and impressions. 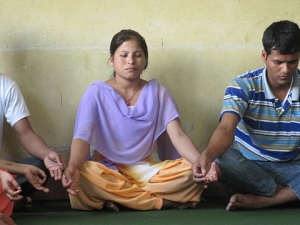 As theatre was a new thing to most of the participants, the trainers with some games to help the trainees develop their imagination and to wake up their bodies. They painted the room in new imaginary colours for example or shook a stone through their bodies.

Then the Sarwanam members continued to teach some games to train quick reaction and interaction.

Having enjoyed the warm-up, some brave UCEP trainees improvised small scenes and acted a short love story, conversations between parents and children or had some serious fights about a broken computer. 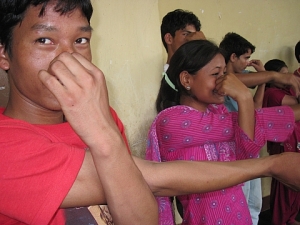 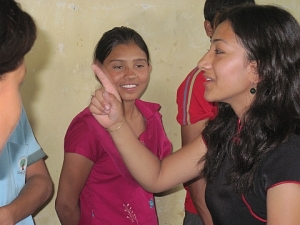 After a break for snacks the participants were given some input about the nine different emotions. (Love, Fear, Proud, Disgust, Laughter, Aggression, Surprise, Sadness and Peace.)With the help of four different squares, or rooms they also imagined themselves feeling these different emotions and expressed them on their faces and also with their body language. It was quite remarkable how angrysome got, or how they fell in love or wandered around proudly. 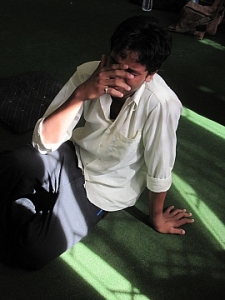 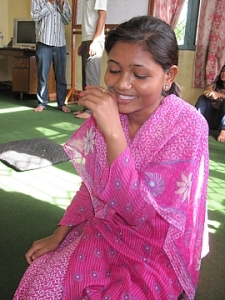 In the end, Ram gave instructions for a last imagination journey to the inner self. Thus all people relaxed and were given a chance to come down to earth. As Ram sent us to the sea side, we also got the chance toexperience the 9th emotion, peace.

At last, there was a feedback round, which changed into a discussion that lasted for almost one hour, because the UCEP trainees had so many questions and wanted to know more and more.

So obviously the training that aimed at waking their interest in drama and acting was a success.

The trainees as well as the trainers enjoyed this Acting Workshop and all agree on one point: one day is not enough! We really hope that they will follow their interest and establish a regular theatre meeting and who knows…maybe there´ll be a next trainig.